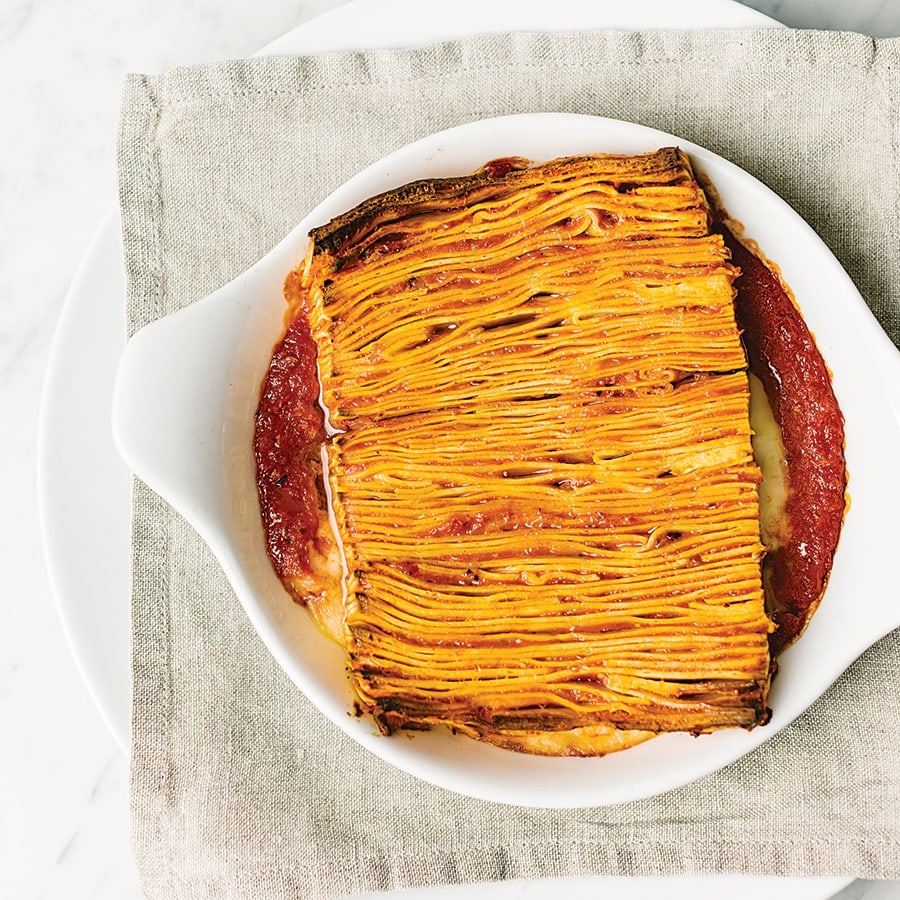 Look, I don’t know who’s calling the shots at the Charles Hotel, and frankly it’s none of my damned business. I’m just a simple food guy. On matters of intra-hospitality backroom intrigue, I stay as neutral as Switzerland, you know, used to. What I can tell you is last April, after a five-year run, Benedetto, Michael Pagliarini’s acclaimed ristorante (we liked it, too: three stars in 2017), was out. A few months later, Bar Enza, a “neo-trattoria” by the Lyons Group—the folks behind Scampo, Rochambeau, Sonsie, and several popular Fenway haunts—was in, rocking a menu of spruced-up Italian crowd-pleasers.

Before we go on, it’s probably worth pausing to unpack “crowd-pleaser,” a loaded term, for sure. There’s no hard-and-fast way to determine, for instance, whether the late Benedetto’s strascinati with Ossabaw pork sausage and treviso was any more or less likely to please the proverbial crowd than, say, the new spot’s hulking “meatball gigante” ($29), made with beef, pork, veal, and barbecue brisket purchased from the Smoke Shop, on a plate of mashed potatoes. It’s subjective. You know it when you see it. Bar Enza’s hit-parade-stocked menu? I see it.

Last summer, it was reported that a ramen spot could be taking over a space in Cambridge that had been home to a longtime Thai restaurant. Now we have learned that a different restaurant that offers ramen and other food items is taking over the space.

Eater Boston is reporting that Bosso Ramen Tavern is getting ready to open in Harvard Square, moving into the former Spicies space on Holyoke Street. The article mentions that the new eatery is an izakaya-style place (rather than a ramen shop) that features Japanese fare including gyoza, tempura, ramen, sushi, seafood dishes, and more, along with sake and wine. Bosso Ramen Tavern has already been “testing the waters” via what appears to have been an ongoing soft opening, though its grand opening is slated for tomorrow (Saturday, March 26).

Two Cambridge artists are raising awareness around what is lost in war with an art installation in the heart of Harvard Square.

When Ross Miller saw photographs of statues covered in protective wrapping in Lviv, Ukraine, he was struck with emotion. A wrapped statue of an ocean goddess with her arm raised reminded him of the water sculptures he likes to create. “It just was heartbreaking that amid everything else, they were also working to protect their artwork, their cultural heritage,” said Miller.

Earlier this month, it was reported that a casual upscale pub in Cambridge was going to be replaced by a location of an eclectic group of restaurants, and now we have learned that the pub has returned, taking over a nearby space that was home to another dining and drinking spot under the same ownership.

According to a source (Beckie Hunter), Grafton Street Pub & Grill is opening in the former Park Restaurant & Bar space in Harvard Square, with a Facebook post from the place indicating that it debuts in its new space at 5:00 PM today. Grafton Street recently left its home on Mass. Ave., making way for an upcoming location of The Friendly Toast, which had an outlet in Kendall Square that closed in the summer of 2020.

Bosso Ramen Tavern, a Japanese restaurant inspired by the ocean, has been quietly testing the waters in Harvard Square (24 Holyoke Street, Cambridge) this month, with a grand opening planned for March 26, 2022.

Although ramen is highlighted in the restaurant’s name, Bosso isn’t a casual ramen shop; it’s a full-service izakaya meant for dates and gatherings, says owner Yasu Sasago, with an extensive menu of options beyond ramen.

Despite his cadre of supporters, most who passed through Harvard Square were never aware of a man known as Michael or his daily life that unfolded in full view of each of them. They were equally oblivious when he died Nov. 18, 2021 in the Bank of America entryway.

Kody Christiansen, a Harvard Extension School student, was among the first to find Michael lying face-first on the sidewalk, before the bank’s front door early the next morning. Just days before, Christiansen had offered Michael a blanket at the shelter.

The unique partnership takes a holistic approach to boosting health, with a second location coming to the South End soon.

Bryan Timko wanted to create a space for the yoga-loving, green juice-drinking public in Boston — and so he did.

Early this month, Timko’s Life Alive Cafes opened a hybrid vegetarian cafe and yoga studio in Harvard Square. It sells açaí bowls and algae smoothies on John F. Kennedy Street. But behind and below the kitchen are two yoga studios, equipped with heated hardwood floors, touch screen televisions, and teachers from the Down Under School of Yoga.

CAMBRIDGE (CBS) — Residents of Cambridge, Massachusetts should consider themselves lucky – a recent survey identifying the “Best Cities To Live In America” ranks the liberal enclave second in the country.

Cambridge received an overall grade of “A+” from the review site Niche. The city earned an A+ or A in the categories of public schools, family friendliness, nightlife, outdoor activities, diversity, health and fitness and commuting. Cambridge got a C or C+ in the areas of housing, cost of living and crime and safety.

The only city ranked ahead of Cambridge was The Woodlands in Texas. Click here to see the full list.

Cambridge was also named the best city in the country for young professionals.

“Living in Cambridge offers residents an urban feel and most residents rent their homes. In Cambridge there are a lot of bars, restaurants, coffee shops, and parks,” Niche states. “Many young professionals live in Cambridge and residents tend to be liberal.”

Other Boston-area communities also shine on Niche’s review platform. Lexington was ranked seventh on the company’s list of the “Suburbs With The Best Public Schools in America.” Wayland was 23rd on that list, and was also highlighted for being the sixth-best suburb to raise a family.

Niche said it came up with its “Best Places To Live” rankings based on Census, FBI, Bureau of Labor Statistics and CDC data, as well as resident reviews.

As the final days of Cambridgian winters draw to an end (save a few snowstorms interspersed between 60-degree days), Harvard students begin to emerge from their thinly insulated colonial dorms and shed their goose-feather overcoats in exchange for sunglasses and T-shirts. Nothing could be more timely than the opening of Harvard Square’s newest establishment and blackhole for college student dollars: Life Alive.