Pamela Painter’s short stories have been praised by Margot Livesey for their “wicked intelligence and ruthless humor.” In Fabrications, which brings together 7 new and 24 selected stories, characters struggle to avoid the chaos in their lives, but—driven by addictions and appetites—often bring on disaster. Nobody is ordinary in Painter’s stories. A burglar can’t believe what he is asked to do by the woman whose jewelry he is stealing. Hitchhikers, hell-bent on murder, are thwarted by the miracle of story-telling. A wife can make rooms—and her husband—disappear, but saves the family dog. A young woman insists on the romance of being married in an Elvis Presley chapel, but for the wrong reasons.

Fabrications is a testament to Painter’s lyric skill and psychological insight across her career. 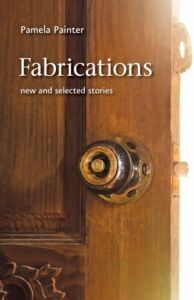