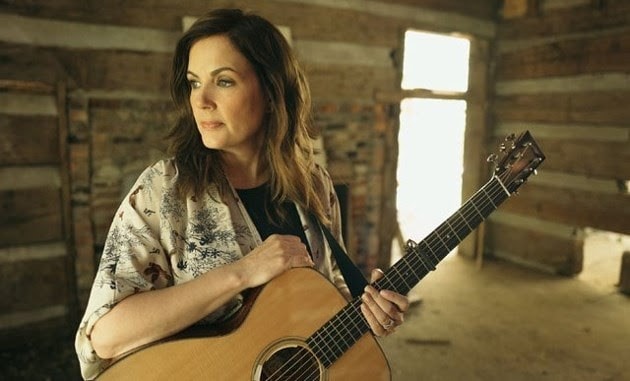 Grammy Award-winning singer, songwriter Lori McKenna will perform a special full-band live stream concert on Friday, December 18 at 7:00PM ET from Club Passim in Cambridge, Massachusetts. McKenna got her start at Passim and considers it a second home. The performance will benefit Club Passim and will be available on the Passim Facebook and YouTube pages, as well as www.passim.org/stream.

Over the summer, McKenna debuted her album The Balladeer at Club Passim. It’s her most personal album to date featuring songs that reflect firsthand on her relationships with her children, husband and family. Following this theme, McKenna wrote the majority of the album alone except for three tracks written with Hillary Lindsey and Liz Rose—a group collectively known as the Love Junkies. The first single off the album,  “When You’re My Age,”  debuted to critical acclaim. Entertainment Weekly declared, “another in her growing repertoire of tear-jerking life advice ballads,” while Rolling Stone praised it as, “intensely moving.”

In addition to her career as a solo artist, McKenna continues to enjoy tremendous success as one of the music industry’s most in-demand songwriters. In 2017, she became the first woman ever to win the Country Music Association’s Song of the Year award two years in a row and also won back-to-back Grammys for Best Country Song for “Girl Crush” performed by Little Big Town and “Humble and Kind” performed by Tim McGraw. Moreover, she became the first female to ever win Songwriter of the Year at the Academy of Country Music Awards that same year. In addition to writing songs for a multitude of award-winning artists including Miranda Lambert, Carrie Underwood, Little Big Town, Tim McGraw, Faith Hill, Hunter Hayes and Reba McEntire, McKenna also co-wrote “Always Remember Us This Way,” which was featured in the Academy Award-winning 2018 film, A Star Is Born. McKenna recently co-wrote the song “Crowded Table” with The Highwomen members Brandi Carlile and Natalie Hemby, which has been nominated for Best Country Song at the 2020 Grammy Awards.

Lori McKenna’s performance on December 18, 2020, 7:00PM will be live streamed from Club Passim and available on the Passim Facebook and YouTube pages, as well as www.passim.org/stream. The show is free to watch, although there is a suggested donation of $50. All proceeds raised will benefit Club Passim.

The mission of Passim is to provide truly exceptional and interactive live musical experiences for both performers and audiences, to nurture artists at all stages of their career, and to build a vibrant music community. Passim does so through their legendary listening venue, music school, artist grants and outreach programs. As a nonprofit since 1994, Passim carries on the heritage of our predecessors-the historic Club 47 (1958-1968) and for-profit Passim (1969-1994). We cultivate a diverse mix of musical traditions, where the emphasis is on the relationship between performers and audience and teachers and students. Located in Harvard Square, Passim serves Cambridge and the broader region by featuring local, national and international artists. Our ultimate goal is to help the performance arts flourish and thereby enrich the lives of members of our community. For a complete schedule, visit www.passim.org.