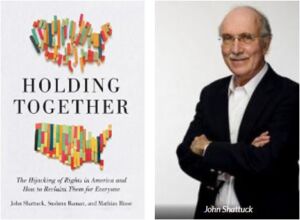 It feels like a new Cold War is upon us – Russia poses an alarming extrinsic threat to the American concept of freedom, and to Western ideas of democratic values.  Russia’s terrible assault on Ukraine and the recent elections of pro-Putin regimes in Hungary and Serbia, coincide with a growing threat to American democracy from within its own borders.

JOHN SHATTUCK, an international legal scholar and human rights leader, is currently Professor of Practice in Diplomacy at Tufts after a long and distinguished career in academia and government.  In the early post-Cold War years, he was responsible for coordinating and implementing U.S. efforts to promote human rights, democracy and international labor rights. The first U.S. official to reach and interview survivors of the genocide at Srebrenica, he helped negotiate the Dayton peace agreement that ended the war in Bosnia and was instrumental in the establishment of the International Criminal Tribunals for the Former Yugoslavia and Rwanda. He also served President Clinton as U.S. Ambassador to the Czech Republic from 1998-2000.

Holding Together: the hijacking of rights in America is co-authored by SUSHMA RAMAN, Executive Director and Mathias Risse, faculty director at the Harvard Carr Center for Human Rights Policy.

Raman is the host of Justice Matters podcast and a contributor to Foreign Policy magazine; she brings two decades of experience in launching and leading social justice and human rights’ initiatives to her position as director at the Carr Center.

Are you alarmed at the steady deterioration of common purpose among your fellow Americans or are you more concerned about the international disregard for human rights and democratic values, we have witnessed in Ukraine and beyond?  Join this spirited discussion to investigate what can be done.