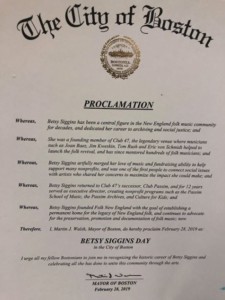 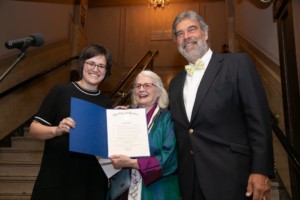 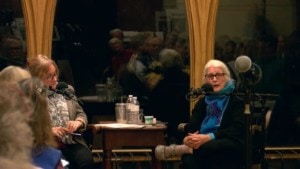 The New England Folk Music Archives preserves, promotes and documents the ongoing cultural legacy of folk music and its connections to New England through education, collaboration and entertainment.

Based on collections from the 1960’s era folk revival stretching to the present the establishing collections include photographs, recordings, and memorabilia from The Club 47, the Cambridge MA folk music community, The Newport Folk Festival, and The Old Vienna Kaffeehaus.

Over the coming months The New England Folk Music Archives will be establishing a dynamic web presence and presenting public events to engage audiences and scholars in the rich world that is folk music in New England.

Mayor Marty Walsh proclaimed February 28th Betsy Siggins Day in the City of Boston, in honor of her decades-long role as a central figure in the New England folk community and her dedication to integrating creative expression and social justice