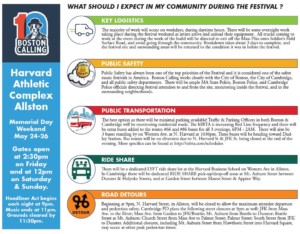 Boston Calling Music Festival is a three-day, multi-stage festival featuring performances from some of the biggest names in music, comedy, film, and art. It began in 2013 at City Hall Plaza in downtown Boston, and after seven successful and critically acclaimed installations, the festival is moving to the Harvard Athletic Complex in Allston to further expand programming. It will be held over Memorial Day weekend, 2017. The festival is primarily an indie and pop rock festival; past performers have included Jack Johnson, Fun, Vampire Weekend, Beck, Pixies, Alabama Shakes, and Ben Harper.