The Wicked Explorers take one last walk through the former Harvard Square mall, being remade into a new mall.

here is a battle brewing in Cambridge over the planned removal of dozens of parking spots along Massachusetts Avenue to make room for vertically-separated bike lanes.

The move is part of a city ordinance requiring the installation of 22 miles of separated bike lanes across the entire city, including the entire length of Massachusetts Avenue, within the next five to seven years.

Business owners say it would require the removal of at least 40 to 50 percent of street parking.

CAMBRIDGE (CBS) — Residents of Cambridge, Massachusetts should consider themselves lucky – a recent survey identifying the “Best Cities To Live In America” ranks the liberal enclave second in the country.

Cambridge received an overall grade of “A+” from the review site Niche. The city earned an A+ or A in the categories of public schools, family friendliness, nightlife, outdoor activities, diversity, health and fitness and commuting. Cambridge got a C or C+ in the areas of housing, cost of living and crime and safety.

The only city ranked ahead of Cambridge was The Woodlands in Texas. Click here to see the full list.

Cambridge was also named the best city in the country for young professionals.

“Living in Cambridge offers residents an urban feel and most residents rent their homes. In Cambridge there are a lot of bars, restaurants, coffee shops, and parks,” Niche states. “Many young professionals live in Cambridge and residents tend to be liberal.”

Other Boston-area communities also shine on Niche’s review platform. Lexington was ranked seventh on the company’s list of the “Suburbs With The Best Public Schools in America.” Wayland was 23rd on that list, and was also highlighted for being the sixth-best suburb to raise a family.

Niche said it came up with its “Best Places To Live” rankings based on Census, FBI, Bureau of Labor Statistics and CDC data, as well as resident reviews.

“The Art of Banksy,” the largest touring exhibition of authentic Banksy artworks in the world, is now open in Cambridge.

The exhibit, which opened Thursday, features more than 100 original works from private collectors across the globe and offers a rare opportunity to view authenticated and certified Banksy artworks rarely seen by the general public.

In today’s Daily Debrief, Curry College is offering $10,000 to anyone with information about hateful messages being found around campus. Also, when you can expect the price of your avocados can take a big hike. Plus, “The Art of Banksy” exhibit opens Thursday in Harvard Square.

An art exhibit opening Thursday in Harvard Square will feature more than 100 original works from Banksy, one of the world’s most mysterious artists.

The British street artist known to the public only by his pseudonym is infamous for his graffiti-style, stencil artwork popping up on streets, walls and public places internationally.

“The Art of Banksy” is a touring exhibit that features a collection of works sourced from private buyers across the globe.

The beloved Brattle Square Florist in Cambridge will not be closing its doors after all.

When it comes to Brattle Square in Cambridge, Zedros and his family have been an evergreen that’s lasted since 1917. Their florist shop always there, their doors always open.

The family sold it nine years ago, and the current owner recently announced he would be retiring and the shop would be shuttered.

“I don’t want the name to go down. One day all of a sudden it goes silent. I wanted it to remain and stay open,” Zedros said.

To make that happen, Zedros – who had remained at the shop as a manager — immediately started a plan to buy back his family’s floral business.

He knew it would be worth it because of the outpouring of support he received when word first got out about its potential demise.

Zedros admits there will be challenges moving forward, including ongoing supply chain issues and staffing shortages.

More than 100 works by the reclusive graffiti artist will be on display starting Feb. 17.

A traveling exhibit featuring more than 100 original artworks by reclusive street artist Banksy is coming to Harvard Square in February.

“The Art of Banksy,” which bills itself as “the largest touring exhibition of authentic Banksy artworks in the world,” will be hosted in a building owned by the Harvard Coop at 12 Palmer St., Cambridge, from Feb. 17 to April 3.

Among the pieces set to be on display are recognizable works like “Flower Thrower,” “Rude Copper,” and original variations of “Girl with Balloon,” the artwork which caused a stir when it was shredded at an art auction in 2018. Most of the works featured in the exhibit were created between 1997 and 2008, and range from prints and canvasses to sculptures.

Starvox Exhibits, the company behind the “The Art of Banksy,” has three concurrent exhibitions currently traveling the world, each featuring around 100 works by the reclusive artist. The company sourced more than $35 million worth of art by Banksy for their exhibits.

“This is a one-of-a-kind exhibition. You will never again have the opportunity to see this many of Banksy’s works in one place,” Starvox CEO Corey Ross said in a press release announcing the exhibit’s arrival in Boston. “Once the exhibition is over, the artwork will be returned to art collectors around the world, and the chances that they will be displayed together again in the future are extremely slim.”

The exhibit has already visited world cities like London, Melbourne, and Amsterdam, as well as U.S. cities like Chicago and San Francisco. Following its stay in Boston, “The Art of Banksy” will head to Denver.

While the works on display are authentic, the exhibit is not sanctioned by the anonymous artist (or artists) behind the Banksy moniker.

“Banksy has NOTHING to do with any of the current or recent exhibitions and they are nothing like a genuine Banksy show,” reads a message on Pest Control, a Banksy-affiliated website. They might be crap so please don’t come to us for a refund.”

CAMBRIDGE (CBS) — “The largest touring exhibition of authentic Banksy artworks in the world,” is coming soon to Cambridge.

The Art Of Banksy, which is not authorized by the famous-but-anonymous street artist, will run in Harvard Square at a Harvard Coop building from Feb. 17 to April 3.

Organizers say the exhibition will feature “over 100 original works from private collectors across the globe,” including “Flower Thrower,” “Rude Copper” and original variations of “Girl with Balloon.” 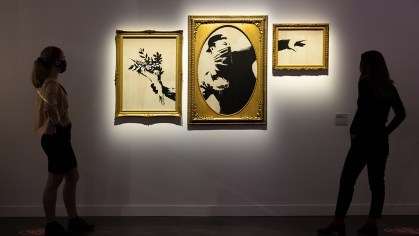