Donald Trump’s 2016 campaign centered around immigration issues such as his promise to build a border wall separating the US and Mexico. While he never built a physical wall, he did erect a legal one. Over the past three years, the Trump administration has put forth regulations, policies, and practices all designed to end opportunities for asylum seekers. If left unchecked, these policies will effectually lead to the end of asylum, turning the United States—once a global leader in refugee aid—into a country with one of the most restrictive asylum systems.

In The End of Asylum, three experts in immigration law offer a comprehensive examination of the rise and demise of the US asylum system. Beginning with the Refugee Act of 1980, they describe how Congress adopted a definition of refugee based on the UN Refugee Convention and prescribed equitable and transparent procedures for a uniform asylum process. The authors then chart the evolution of this process, showing how Republican and Democratic administrations and Congresses tweaked the asylum system but maintained it as a means of protecting victims of persecution—until the Trump administration. By expanding his executive reach, twisting obscure provisions in the law, undermining past precedents, and creating additional obstacles for asylum seekers, Trump’s policies have effectively ended asylum. The book concludes with a roadmap and a call to action for the Biden administration and Congress to repair and reform the US asylum system. 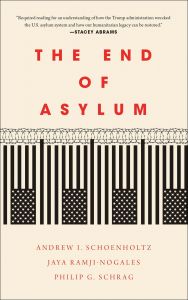