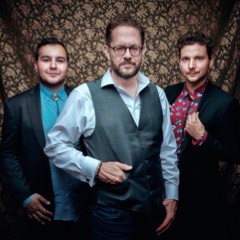 Ultrafaux, led by acclaimed composer and guitarist Michael Joseph Harris, performs original music inspired by traditional Balkan and Sinti music, French Musette, Funk, Jazz Manouche, Blues, be-bop and Western swing. They have been featured at top festivals all over the world including Festival Django Reinhardt in France. Ultrafaux songs Latcho Dromo and Signs of Struggle were featured on two consecutive releases of “Django Festival,” a compilation of the finest Gypsy Jazz in the world produced by Jon Larsen. This special show at Regattabar is part of a Northeast Tour featuring violinist Jason Anick of Rhythm Future Quartet.

One of the youngest violin professors at Boston’s Berklee College of Music, Anick is considered “a rising star in the world of jazz violin and mandolin” (Downbeat Magazine). In addition to leading various groups under his own name and performing with the Rhythm Future Quartet, Anick has been touring and recording with Grammy award-winning Nashville guitar virtuoso John Jorgenson since 2008 when he was recruited while still a senior at the Hartt Conservatory.