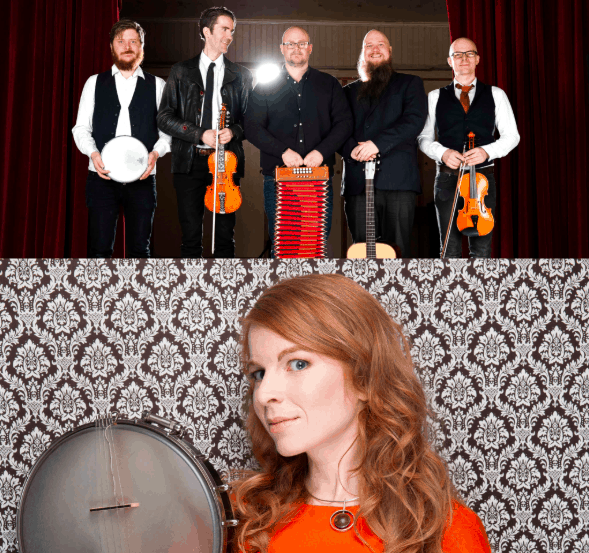 SVER play epic Nordic folk music with relentless energy and seductive spark taking you on a fantastic musical journey guaranteed to excite you. Ranging from the very dreamy to a swinging, pounding and sweaty madness – you are invited to the party, greeted by a welcoming primal force that pulls you into the dance. Since the group’s inception, SVER has gone from strength to strength, playing extensively throughout Europe and the US, gaining a reputation as one of the most acclaimed live acts in the Nordic folk scene.

SVER’s latest album “Reverie” (2018) – their fourth release – arrives as they celebrate 10 years together as a quintet. Listen to these musicians as they gel and swing together in a way that’s seldom encountered and you will understand why they have won a reputation as red hot performers whose shows are sizzling affairs. the long-awaited follow up to the critically acclaimed albums ”Fryd” (2015), “Fruen” (2010), and “SVER” (2007).

SVER has often been described as “sounding electric without electricity”, and their flexible musicianship has also made them an attractive backing band for some of Scandinavia’s leading singers in different genres. That has lead to playing on TV-shows, big festivals and positions in the radio charts with the music ranging from folk to reggae/dancehall and rap. Their imaginative soundscapes, grooves, and melodies will take you on a journey over the Norwegian fjords and mountains, into the lively pubs and back out into the deep forest of their musicality.

SVER consists of Olav Luksengård Mjelva (fiddle and Hardanger fiddle), Anders Hall (fiddle and viola), Leif Ingvar Ranøien (diatonic accordion), Adam Johansson (guitar) and Jens Linell (Drums and percussion). Olav and Leif Ingvar have played together since 2002. Vidar Berge joined the group in 2007 on guitar and together they released the self-titled album “SVER”. In the spring of 2008, Anders and Jens completed the band, and they released “Fruen” in 2010. Vidar quit the band later that year and Adam joined the group.

Moira Smiley is a Singer / Composer who creates and performs new work for voices.  A musical polyglot, and vocal shape-shifter, her voice – and composing – are heard on feature films, BBC & PBS television programs, NPR, and on more than 60 albums.