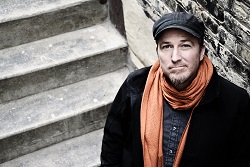 You’re invited to 12 hours of Peter Mulvey!  Join Peter as he plays from 10am-10pm in the club to raise money for the National Youth Science Foundation, HeadCount.org, Passim, and a refugee relief organization (to be decided).  Special musical guests will join Peter throughout the day.

No tickets are required for this show, but there is a suggested donation of $10 per hour that you attend.  You can donate in advance here, or you can donate in-person at the concert.

SEATING NOTE: All seating will be General Admission.  It is possible that the room will reach capacity, in which case patrons will have to wait outside until seats open up.  Donating in advance does not guarantee you a seat.

KITCHEN NOTE: Our kitchen will be serving our brunch menu from 10am-3pm and our dinner menu from 5pm-10pm.  Drink service will be available throughout.

Peter Mulvey is a veteran singer and songwriter from Milwaukee, Wisconsin. He began his career on the streets of Dublin, Ireland, as a busker, and from there moved on to performing in the subways and streets of Boston, Massachusetts. This led to his first record deal and a leap to full-time national and international touring, beginning in the early Nineties.

Mulvey is an iconoclast within the singer/songwriter world. Restless and inventive, he has made seventeen records, spanning rock and roll, folk, Jazz, spoken word, and Americana. A long-standing gig at the National Youth Science Camp led to a spoken word piece, “Vlad the Astrophysicist”, which became a TEDx talk, and then an illustrated book. In 2007 he began an annual late summer tour by bicycle instead of by car and airplane- the 10th annual bicycle tour will happen this September. He has taught songwriting and guitar workshops at the Swannanoa Gathering and at various folk festivals across the U.S.

Mulvey continues to tour, playing over a hundred shows a year as he has for the past twenty five years. This is the core of what he does: music, in a room, performed for a live audience.