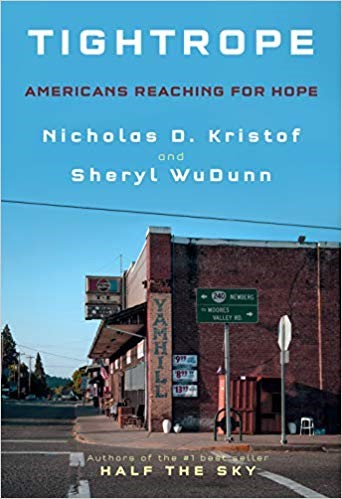 All books included with tickets are pre-signed editions of Tightrope, personally signed by the authors. This event does not include a public book signing. (Additional pre-signed copies will be available for purchase at the event, while supplies last.)

With stark poignancy and political dispassion, Tightrope draws us deep into an “other America.” The authors tell this story, in part, through the lives of some of the children with whom Kristof grew up in rural Yamhill, Oregon, an area that prospered for much of the twentieth century but has been devastated in the last few decades as blue-collar jobs disappeared. About one-quarter of the children on Kristof’s old school bus died in adulthood from drugs, alcohol, suicide, or reckless accidents. And while these particular stories unfolded in one corner of the country, they are representative of many places the authors write about, ranging from the Dakotas and Oklahoma to New York and Virginia