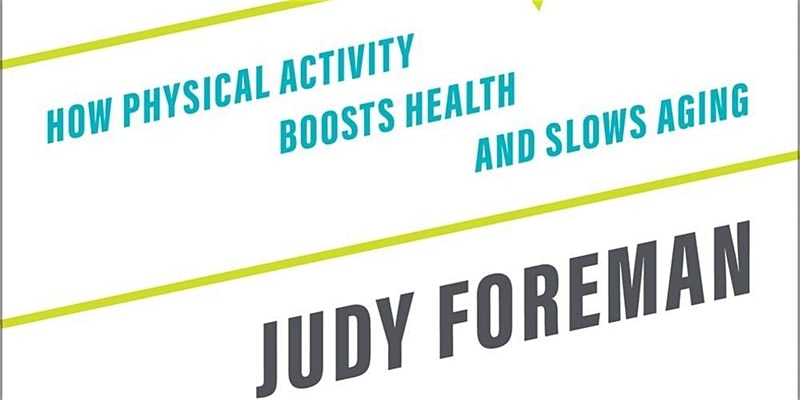 Aging, despite its dismal reputation, is one of the great mysteries of the universe. Why don’t we reproduce, then exit fast, like salmon? Could aging be one big evolutionary accident? Is senescence, the gradual falling apart of our bodies, at least partially avoidable? Can we extend the healthy lifespan and reduce the lingering, debilitating effects of senescence?

In this book, investigative health journalist Judy Foreman suggests that we actually can, and the critical element is exercise, through its myriad effects on dozens of molecules in the brain, the muscles, and other organs. It’s no secret, of course, that exercise is right for you and that exercise can extend longevity. What Foreman uncovers through extensive research into evolutionary biology, exercise physiology, and the new field of geroscience is precisely why exercise is so powerful – the mechanisms now being discovered that account for the vast and varied effects of exercise all over the body. Though Foreman also delves into pills designed to combat aging and so-called exercise “mimetics,” or pills that purport to produce the effects of exercise without the sweat, her resounding conclusion is that exercise itself is by far the most effective, and safest, strategy for promoting a long, healthy life. In addition to providing a fascinating look at the science of exercise’s effects on the body, Foreman also provides answers to the most commonly asked practical questions about exercise.

Judy Foreman is a nationally syndicated health columnist who has won more than 50 journalism awards and whose columns have appeared regularly in the Boston Globe, Los Angeles Times, Dallas Morning News, Baltimore Sun, and other national and international outlets. She graduated Phi Beta Kappa from Wellesley College, served in the Peace Corps in Brazil for three years, and received a Master’s degree from the Harvard Graduate School of Education. From 2000 to 2001, she was a Fellow in Medical Ethics at Harvard Medical School. She has been a Lecturer on Medicine at Harvard Medical School, a Knight Science Journalism Fellow at the Massachusetts Institute of Technology, and a Senior Fellow at the Schuster Institute for Investigative Journalism at Brandeis University. She has also been the host of a weekly, call-in radio show on Healthtalk.com. She has won more than 50 journalism awards, including a George Foster Peabody award for co-writing a video documentary about a young woman dying of breast cancer, and she is author of A Nation in Pain: Healing our Biggest Health Problem (Oxford, 2014) and The Global Pain Crisis: What Everyone Needs to Know (Oxford, 2017).