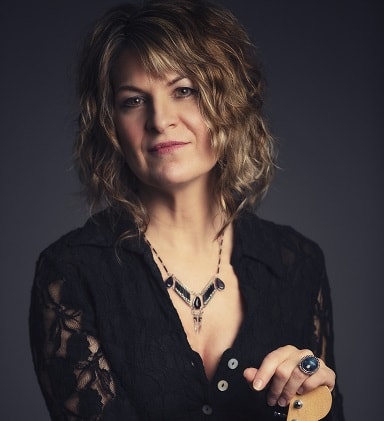 Les Sampou will be presenting a special night of country blues classics and originals.  Sampou has performed at such world class stages as Montreal Jazz Festival, Toronto Blues Festival, SXSW, and Philadelphia Folk Festival, and has appeared on  top-syndicated radio programs such as Acoustic Cafe, World Cafe, and NPR. A story teller, guitarist and award-winning songwriter, her shows are remembered long after the curtains go down.

BOSTON GLOBE  “Armed only with her guitar, searing mezzo, and a Monday-morning-size case of the blues, she delivers a solo set of folk blues. She takes country blues classics reinventing and reinvigorating them until they fit her style like a tight pair of jeans; and her own tunes crackle with modern sensibility.”

DIRTY LINEN  “The New England-based Les Sampou, an acoustic steel string and slide artist, delves into the history of the deep South with only her strongly interpretive voice and superb guitar work. Sampou captivates with her own original work as well as with classic gems by Fred McDowell, Willie McTell and Bessie Smith, John Hurt, and Robert Johnson.

SING OUT  “Les Sampou reveals herself to be a formidable interpreter of the genre, reminiscent of a young Bonnie Raitt or Rory Block. Her guitar playing is authoritative and she sings with a voice that understands the nuances and poetry of the blues. Depending on the song, she sounds tough, sweet, sexy or sly.”