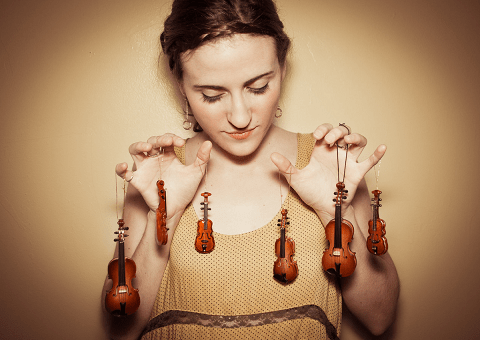 Jenna Moynihan is regarded as one of the best of the best in the new generation of fiddle players. Versatile and inventive, her fiddling style draws strongly from the Scottish tradition, but is not bound by it. Folk Radio UK said of her playing, “…from the first time you hear Moynihan, it is clear that her playing is resonating straight from the depths of her soul.”

Jenna graduated from Berklee College of Music with honors and was a recipient of both the Fletcher Bright Award & The American Roots Award. She performs around the world, and had appeared with The Milk Carton Kids, Darol Anger & the Furies Old Blind Dogs, Laura Cortese & The Dance Cards, A Celtic Sojourn & more. She has appeared on Jimmy Kimmel Live!, CBS Sunday Morning, and as a soloist at Symphony Hall. Her debut solo album Woven was released in 2015. Jenna also performs in a duo with harpist Màiri Chaimbeul, their album One Two was released in 2017.