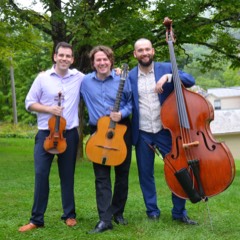 True to its name, the International String Trio has honed an expansive repertoire embracing nearly a dozen styles from far-flung lands. Employing their instruments as passports, the adventurous triumvirate unlocks the doors to a global array of tunes drawn from jazz, folk, popular, classical, film and other sources.

Slava Tolstoy – guitar, musical director
Slava’s background includes studies of composition and guitar performance at St.-Petersburg Jazz Conservatory, Russia. He received his Bachelor Degree in Contemporary Writing and Production from Boston’s renowned Berklee College of Music, where he was a scholarship student. He founded the International String Trio in 1999 and developed a unique performance concept for the ensemble. Slava plays guitar in the group as well as does band leading and arranging. In addition to being an accomplished performer Mr. Tolstoy is also a songwriter and producer with several credits under his belt.

Rob Flax is an award-winning multi-instrumentalist, composer, and educator from Evanston, IL with a playful heart and an open mind. He has performed nationally and internationally with groups of many different styles, including opening for B.B. King and Tower of Power, playing viola and violin with the Trans Siberian Orchestra and YouTube star Jacob Collier, upright bass in an Argentine tango ensemble, mandolin and fiddle in various bluegrass bands, electric violin in several rock bands, collaborations with modern dancers, and more. As a composer Rob has written music for choreographers, film (including work on the soundtrack of James Franco’s film As I Lay Dying), and several original projects. Rob is a recent graduate of the New England Conservatory (M.M. 2012 – Contemporary Improvisation, Music In Education), and he currently lives in Boston, MA.

Max is a Boston-based musician, composer and bass teacher. He has been fortunate enough to have shared the stage with renown jazz musicians, Kenny Werner, Ingrid Jensen, George Garzone and Perico Sambeat. He has played in venues such as the Regatta Bar, Sculler’s Jazz Club, the Blue Note, Dizzy’s Club Coca Cola at Lincoln Center, the Umbria Jazz Festival, and the John F. Kennedy Center for the Performing Arts. After graduating high school he was awarded a full-tuition scholarship to study at Berklee College of Music. He has also spent some time living in Valencia, Spain and considers it his second home as well as the other musical community to which he belongs. He currently is earning his master’s degree the Berklee Global Jazz Institute and is a part of several local groups as a sideman, leader or co-leader. He performs and tours domestically and internationally.

Ethan is a rising star on the bluegrass and roots / Americana scene. As a virtuoso mandolin player he won such accolades as the National Mandolin Championship and the RockyGrass Mandolin Championship. He is a member of several critically acclaimed bands, such as: Corner House, Mudskippers, The Harmolodic String Band. He often freelances with well known performers including Darol Anger and Tony Trischka. An involved member of the Boston alt-bluegrass scene, his path has wended its way through traditional bluegrass, to Bach partitas, to free jazz. His record, “Flux”, is made up of original tunes drawing from all these wells.”

Tucker was born in New Hampshire, and raised in Florida, where he began his career at the Bradenton American Legion Jam Sessions. When it was time to attend college, Tucker studied with various masters including Jerry Bergonzi and George Garzone, before graduating in 2009 from the Jazz Studies program at the New England Conservatory of Music.