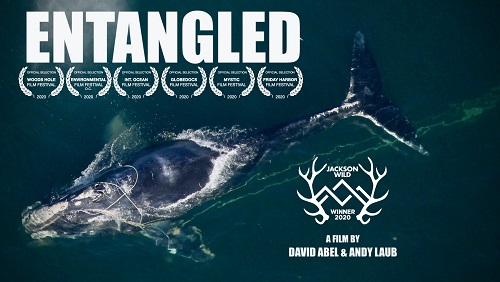 Entangled is an award-winning, feature-length film (75 min.) about how climate change has accelerated a collision between one of the world’s most endangered species, North America’s most valuable fishery, and a federal agency mandated to protect both. The film chronicles the efforts to protect North Atlantic right whales from extinction, the impacts of those efforts on the lobster industry, and how regulators have struggled to balance the vying interests. Directed by David Abel and Andy Laub—makers of Lobster War and Sacred Cod, Entangled won a 2020 Jackson Wild Media Award, nature films’ equivalent to the Oscars. It also won Best Conservation Film at the Mystic Film Festival.

Learn more and watch the trailer at: www.ENTANGLED-FILM.com

Upon joining the Zoom webinar, audience members will receive a link to watch the film online. After seeing the film, everyone can re-join the Zoom webinar for a Q&A with Director, David Abel.

To join the program, you will need to download the free Zoom app in advance. If you already have Zoom, you do not need to download it again. For details on how to improve your Zoom experience, visit the How to Attend an HMSC Program webpage.

David Abel is a Pulitzer Prize-winning reporter who covers fisheries and environmental issues for the Boston Globe. Abel’s work has also won an Edward R. Murrow Award, the Ernie Pyle Award from the Scripps Howard Foundation, and the Sigma Delta Chi Award for Feature Reporting. He co-directed and produced Sacred Cod, a film about the collapse of the iconic cod fishery in New England, which was broadcast by the Discovery Channel in the spring of 2017. He also directed and produced two films about the Boston Marathon bombings, which were broadcast to national and international audiences on BBC World News, Discovery Life, and Pivot. His other films include Lobster War and Gladesmen: The Last of the Sawgrass Cowboys. Lobster War, which is being distributed by Gravitas Ventures, won the 2018 award for Best New England Film at the Mystic Film Festival and was runner-up for the Grand Prize for Best Feature Film at the 2018 International Maritime Film Festival. Gladesmen won the 2018 Made in Miami Award at the Miami Film Festival. Both of those films are also being distributed by Bullfrog Films. Abel, who began learning to make films as a Nieman Fellow at Harvard University, is the film’s director, producer, writer, and director of photography.

Andy Laub, founder and director of Andy Laub Films, has hiked more than 7,000 miles in search of compelling stories. From nature films to cultural documentaries, he has worked as a writer, cinematographer, editor, visual effects artist, expedition coordinator, and soundtrack composer for networks including the Discovery Channel, National Geographic Channel, BBC World News, Amazon Prime, and Hulu. He co-produced and directed Sacred Cod, Lobster War, and Gladesmen with David Abel. Laub’s other films have explored the urban boom in Mongolia, the application of ancient building traditions by Hopi Indians, wildlife in the Pyrenees, and a trek he made across the Pacific Northwest Trail. His film As It Happens: Pacific Crest Trail has been viewed by nearly a million people worldwide. Laub is the film’s producer, editor, writer, soundscape designer, and soundtrack director.