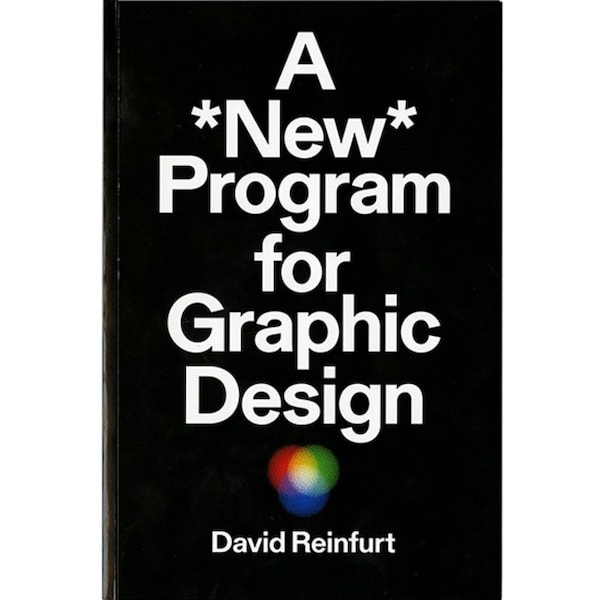 Join us on Zoom

Join us at 7:30pm EST for a live Zoom conversation between designer David Reinfurt and Larissa Harris, a curator at the Queens Museum. Reinfurt will discuss the connection between designer Bruno Munari’s teaching residency at Harvard University’s Carpenter Center for the Visual Arts and Reinfurt’s recent publication, A *New* Program for Graphic Design.

In the spring of 1967, Italian designer Bruno Munari was invited to the Carpenter Center for the Visual Arts to teach a short course in graphic design. For four months, Munari led students to develop an inventory of new methods and techniques for graphic design. The course was later compiled into a textbook, Design e Comunicazione Visiva.

A *New* Program for Graphic Design is a do-it-yourself textbook that builds on mid-to-late-20th-century pedagogical models to convey advanced principles of contemporary design for a general reader. Rooted in three courses (Typography, Gestalt, and Interface) initially developed for liberal arts students at Princeton University, the book provides a broad introduction from Benjamin Franklin to Bruno Munari, Moholy-Nagy to Muriel Cooper and the Macintosh computer. A *New* Program for Graphic Design is co-published by Inventory Press, Los Angeles, and Distributed Art Publishers, New York.

In 1967, Bruno Munari said: “Knowledge of the new means of visual communication is indispensable for a designer who has to operate in the heart of society. After the invention of the compass, nobody makes circles by hand anymore.”

Please note this virtual event requires pre-registration. Please contact ccva@fas.harvard.edu with any questions ahead of this event.

Larissa Harris is a curator at the Queens Museum, where she has organized a variety of exhibitions, such as Red Lines Housing Crisis Learning Center with Damon Rich and the Center for Urban Pedagogy (CUP) (2009); The Curse of Bigness, which included Dexter Sinister, J Morgan Puett, Survival Research Laboratories, and others (2010); the first US museum show of Sung Hwan Kim (2011); a new work with Pedro Reyes, The People’s United Nations (pUN) (2013); and a thirty-year retrospective of performance group Los Angeles Poverty Department (LAPD) (2014). She co-organized 13 Most Wanted Men: Andy Warhol and the 1964 World’s Fair with Nicholas Chambers at the Andy Warhol Museum, which opened at the Queens Museum on the 50th anniversary of the fair. With critic Patti Phillips, she organized the first survey of the work of Mierle Laderman Ukeles (2016). Upcoming exhibitions include After the Plaster Foundation, or, “Where can we Live?” including Simon Leung, Sondra Perry, Caroline Woolard, and others, opening in Fall 2020; and The Conference of the Animals, the first US museum commission of the work of Ulrike Müller, which opens fall 2020 for long-term view. In addition, she helps run the studio program at the Queens Museum, which hosts eight international artists for two-year terms, and co-produces exhibitions with guest curators, ranging from Peter Schumann: The Shatterer with curator Jonathan Berger (2013), to Nicolas Moufarrege: Recognize My Sign with curator Dean Daderko (2019). Between 2004 and 2008 she was associate director of the Center for Advanced Visual Studies at MIT, working under Krzysztof Wodiczko; from 2002–2003, she was associate editor at Artforum, and from 1997–2002 was programs associate at MoMA PS1. She has a B.A. in English from Columbia University in the City of New York and was a 2001 Whitney Independent Study Program Critical Studies fellow.

David Reinfurt is an independent graphic designer and writer in New York City. He graduated from the University of North Carolina in 1993 and received an M.F.A. from Yale University in 1999. Reinfurt worked as an interaction designer with IDEO (San Francisco) from 1995–1997. At IDEO, he was the lead designer for the New York City MTA Metrocard vending machine interface, still in use by millions of people every day thirteen years later. On the first business day of 2000, Reinfurt formed O-R-G inc., a flexible graphic design practice composed of a constantly shifting network of collaborators.

Together with graphic designer Stuart Bailey, Reinfurt established Dexter Sinister in 2006—a workshop in the basement at 38 Ludlow Street on the Lower East Side in New York City. The workshop is intended to model a Just-In-Time economy of print production, running counter to the contemporary assembly-line realities of large-scale publishing. This involves avoiding waste by working on-demand, utilizing local cheap machinery, considering alternate distribution strategies, and collapsing distinctions of editing, design, production and distribution into one efficient activity. Dexter Sinister published the semi-annual arts magazine Dot Dot Dot from 2006–2011. After running O-R-G since 2000, and Dexter Sinister since 2006, Reinfurt set up another entity in 2012, this time a 501c3 corporation called The Serving Library with Stuart Bailey and Angie Keefer. The Serving Library is a cooperatively-built archive that assembles itself by publishing. It consists of 1., An ambitious public website; 2., A small physical library space; and 3., A publishing program, which runs through 1 and 2.

Reinfurt began teaching at Princeton University in 2010. Before coming to Princeton, David held teaching positions at Columbia University Graduate School of Architecture, Planning, and Preservation, the Rhode Island School of Design, and Yale University School of Art. On arrival at Princeton, David worked to re-establish the Typography Studio and introduce the study of Graphic Design as a practical and theoretical starting point for students from all corners of the university as well as visual artists. Reinfurt was 2010 United States Artists Rockefeller Fellow in Architecture and Design. He has exhibited widely and his work is included in the permanent collections of the Walker Art Center, the Whitney Museum of American Art, Cooper Hewitt National Design Museum, and the Museum of Modern Art. David was the 2016–2017 Mark Hampton Rome Prize fellow in Design at the American Academy in Rome. Muriel Cooper, a book about the pioneering designer he co-wrote with Robert Wiesenberger, was released in 2018 from MIT Press.