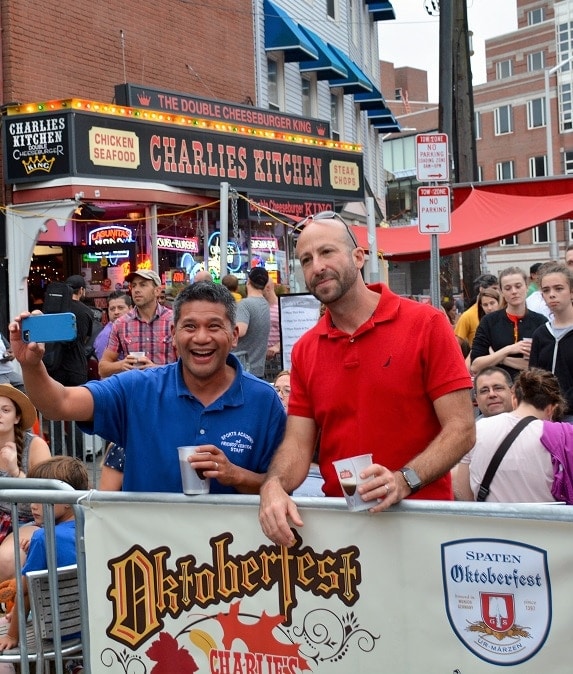 It’s back! The Harvard Square Business Association is excited to announce the return of the 42nd Annual Oktoberfest on Sunday, October 10th.

We’re also welcoming back a Harvard Square classic, The Rocky Horror Show. This live stage musical, whose cast will perform selections from their production, makes a triumphant return on October 14th for a two-week run.

Within and beyond the festival grounds, Harvard Square’s favorite restaurants have taken to the streets with outdoor dining patios. Deliciousness awaits you, from casual to high-end and everything in between! Order a cocktail or a beer and raise a glass to this beloved and boisterous Fall tradition!

Denise Jillson, executive director of the Harvard Square Business Association, said, “Oktoberfest 2021 will be unlike those of recent memory. As always, there will be lots of music, dancing, artisans, food, vendors, crafts and beer gardens. This year we’re also spotlighting square-wide eateries and retailers. To help support our businesses who have been struggling over the past 19 months, we are making it easy and fun for folks to seek out old favorites and discover new ones.”

Jillson went on to say, “For the first time ever, in lieu of our traditional Oktoberfest beer gardens, we are highlighting established patios and eateries, both inside and outside of the festival area. We will not place vendors in front of existing businesses, giving both greater visibility. We’re enthusiastically encouraging our retailers to open their doors wide, decorate their windows, light up their storefronts and spill out onto the sidewalk!”

Additionally, the Rotary Club of Cambridge “Chalk-on-the Walk” art installation will transform Church Street into a colorful display of artistry and creativity.

Oktoberfest in Harvard Square was started in 1978 by the late Frank Cardullo, a Square mover, shaker and owner of the renowned Wurtshaus, which served up traditional German food from 1917 until it closed in 1996. The early festivals were in keeping with old world customs. Over the years, the festival has taken on a more discerningly Cambridge vibe to become an Oktoberfest unlike any other!   Sadly, this year, the HONK! Parade will not take place due to ongoing COVID concerns. We look forward to next year and are delighted to showcase this year’s entertainment line up!

12pm
VibeCheck
VibeCheck is a band from Cambridge made up of teenage multi-instrumentalists, songwriters and producers. Playing a repertoire of indie, electro, rock, funk covers and originals, they can often be found performing in Harvard Square to raptured audiences.
1pm
Squares in the Square Squares in the Square are a whipped up soul, RnB, jazz, and funk band that can be heard performing on Brattle Plaza in Harvard Square year-round.

2pm
The Bullock Brothers
The Bullock Brothers have sung and ministered to thousands throughout New England and beyond. They perform a variety of gospel songs that draw enthusiastic responses from all ages. They were formed in 1950 and consisted of six brothers, of which Richard and George, ordained ministers, are the only two brothers still singing. The Bullock Brothers are continuing a gospel tradition passed to them by ‘Singing Walter’ as he was known some years ago as he traveled the revival circle signing in their home State of North Carolina.

4pm
Veronica Robles
Harvard Square is thrilled to welcome back Mariachi singer and cultural icon for Latinos in Boston, Veronica Robles. She has effectively utilized the power of arts and culture to bring the community together by raising awareness on the importance of diversity and she has empowered youth by employing them and teaching them about their roots and culture.

Robles is Co-founder and Director of the Veronica Robles Cultural Center, a non-profit organization that supports community action and economic growth in East Boston, offering Latin American arts and culture programs while also providing jobs for youth. Veronica Robles continued to influence the community in the aspect of arts. In June of 2016, the Opinion section of the Boston Globe published an article about “The Changing Faces of Greater Boston”. This is where she represented the new Boston together with her assembled Boston’s first-ever-all-female Mariachi band.

5pm
The To Be Determined Brass Band
To Be Determined Brass brings groovy voicings to a wide mix of composers. From Duke Ellington to Led Zeppelin, to Youngblood Brass to Wulfpeck and Jellyroll Morton, done with an eclectic brass handle attached, so you can carry them off into the funky NOLA-influenced bayou in your mind. Who needs guitars!?

2pm – 5pm
The Floor Lords
The Floor Lords were established in 1981 at the adolescence of the Hip Hop movement. Since then, they have played a significant role in the growth of hip hop culture, contributing wholeheartedly by helping to define and ultimately expand upon the art of breakdancing or more commonly known as “Breaking” in their community.   ​The group focuses on bringing all five elements of Hip-Hop culture to their fans and followers through television, films, competition and performances. Some notable appearances include films “Krush Groove” “Step Up 3D” and “In the Heights”. The Floor Lords continue to rack up accomplishments from creating their own theatre show called “Floor Lore” to collaborating with sneaker company “Saucony” on an official “breakdance” sneaker.

The Winthrop Park Stage
2pm – 4pm
SINTI RHYTHM
SINTI RHYTHM is an acoustic, hot-jazz quartet performing vintage swing in the style of the great Django Reinhardt. Their repertoire includes standards from the Great American Songbook, lesser-known gems from the ’20s and ’30s, compositions by Django, and original pieces. Their instrumentation is clarinet, two guitars, and string bass, played with a propulsive, infectious beat that hearkens back to the pre-war heyday of classic jazz.

This event is free and open to the public.